The daughter church of St Mark's was built in 1929 to the designs of A E Cogswell at a cost of £6,000.  Its rustic exterior is unique on Portsea Island, the interior echoes Cogswell's use of timber in his public houses.  This rusticity recalls that when it was built, the area to the north was still mainly agriculture.

Internally the dominating feature is the lantern, with its spired belfry.  The brick interior has been rendered.

The single span interior is surprisingly large; it seats  about 250.  With its white-washed walls and ornaments, it presents an attractive, honest appearance.

The 1949 window is by Spear, depicting Christ in Majesty, Peter and Mary Magdalene, is good and harmonises with the rest of the interior.  One cleric declared that it looks like the Magdalene "is holding an ice-cream soda - complete with straw"  - most irreverent!

There is a Lady Chapel in the south-east corner. A painting of the 'Madonna and Child' by David O'Connell (1960) hangs in the chapel.  It is a strange mixture of styles, which somehow do not coalesce.

The Mission was originally to be dedicated to St Chad; but for some reason the poor Saint was 'deserted'. and the church eventually built on another site.

Taken from 'Churches, Chapel and Places of Worship on Portsea Island' by the late John Offord (1989). 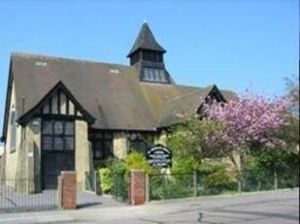 St Nicholas Church celebrated its 80th Birthday on St Luke's Day, 18 October, in 2009.  The preacher was the Rev'd Nicholas Papadopolous, previous Priest-in-Charge in 2000 for about 3 years.

Here are some of the photographs taken after the service 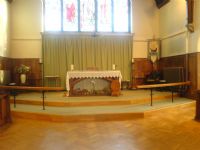 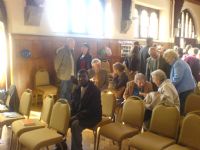 Preparing for lunch after the service 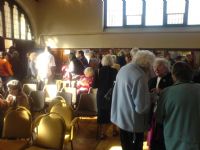 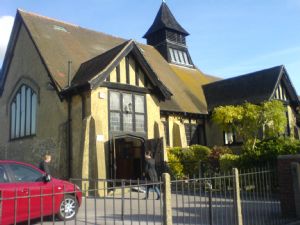 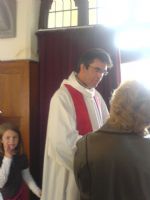 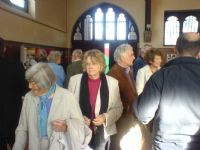 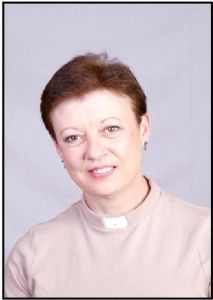 Bev Robertson, 1st Vicar of St Nicholas Church.  Resigned in 2010 to return to her native Birmingham. 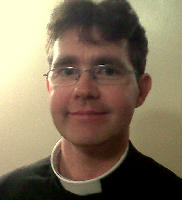